Widex has introduced a new hearing aid, called the Moment.  The Moment builds upon the success of their previous aid, the Evoke, and improves the sound quality and speech recognition using a new digital processor.

The part of the processing that is most unique is one that sets the Widex Moment apart from other aids is called Zero Delay.

Basically, whenever a hearing aid processes sound there is a delay from when the sound is received by the microphone , is processed, and then enters the ear and through the receiver.

When a person has what is called an open fitting the ear canal is not blocked, as it might be when a person is wearing a custom made hearing aid.

Sound comes naturally into the ear canal while at the same time the aid is also putting that same sound into the ear.  There is a slight delay when the first sound (the one that goes straight into the ear) and the second from the aid hit the eardrum.

When this happens, there is a slight distortion of the sound, what is called the “comb effect”, so called because when you see a visual representation of the two sounds hitting the eardrum at slightly (by mere milliseconds) different times, it looks like the teeth of a comb.

This comb effect results in distortion and sound that does not seem as natural as it could.  The video below illustrates well what is going on.

What Widex has done with the Moment (among other enhancements) is to virtually eliminate this comb effect by having the fastest processing possible of the sound (compared to other aids on the market), resulting in this Zero Delay.  The result is a more natural and clearer sound.

In addition to the great sound quality, the Moment is able to connect directly to an I-phone via a Bluetooth connection (if you have an Android phone you would need what is called a Com-Dex, which is an intermediary device that you would use to connect the phone to the Moment aids.  The Com-Dex is worn around your neck.  You can still use the app to make adjustments on the aids).  When you get a phone call, just answer it and it will go directly to your aids.  Having the sound come into both ears (if you wear two aids) would result in clearer conversations.

The Moment, like other aids, uses batteries.  However, there is also a rechargeable version.  In fact, it is the smallest rechargeable aid on the market.  Many of our clients who have rechargeable aids find it very convenient.  You just put the aids in the charger at night, and in the morning take them out and they are ready to go.  No more batteries to worry about! The charge will last 18 to 20 hours, which should be enough for most users

Pictured below is the rechargeable Moment: 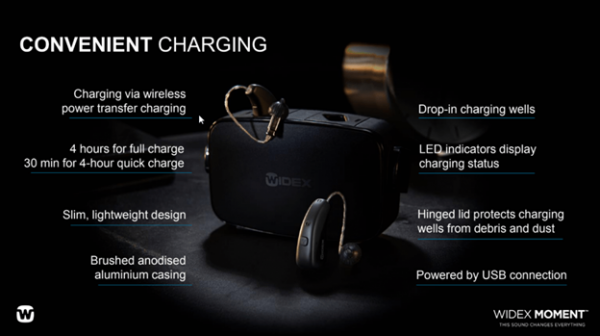 In addition, there is a great Phone App (see above) that is used with the aid. With the app, you can adjust the volume, change programs (for example, if you had a specific restaurant program, you could go to it), adjust frequencies, and find your hearing aids if you lose them.

There is also a unique part of the aid called the SoundSense Learn. This lets you do an A/B comparison of the sound around you. For example, you might be in a restaurant and the noise is interfering with what you hear. You go to the SoundSense learn section of the app and choose which sounds best, A or B.

The aids know what your hearing loss is like, and they make an educated guess about what would sound good to you. After 6 or 7 comparisons, it would ask you if the sound is satisfactory. If it is, you can leave it there. If not you could keep going until it sounds the way you want it. Below is a video link that talks about the SoundSense learn. The aid they are talking about is the previous one to the Moment, called the Evoke. The ideas are still the same.

The Moment comes in 4 levels. The Basic is the 110, the Advanced is the 220, the Midlevel is the 330, and the Premium is the 440. The main difference between the levels is the number of programs you can have on the aids, as well as the Hearing Care Professionals ability to make more fine tuning adjustments. You get the most choices in the Premium level. For example, the Premium has a special program, called Social, to help with small gatherings, such as a cocktail party (which will probably be more useful in the future after the pandemic is over). In all the levels the app works the same.

The Moment is also available in custom made models. These are aids that are made specifically for you. They fit in the ear and are discreet as far as the look of the aid in your ear. The Moment canal aids are available in several sizes, ranging from the ultra small CIC(Completely in Canal) to the In-the-Ear, which fills up the whole ear. The Moment custom aids can use the Moment app, but are unable to directly stream phone calls to the aids. They are also not rechargeable.

The Moment has other aspects to it that you may find helpful. To learn more, you can go to Widex.com, or you can call Chris at 203-866-3838. You can call and make an appointment for a free consultation at the Dann hearing Center. We look forward to seeing you.