The Hurdles to Getting Hearing Aids 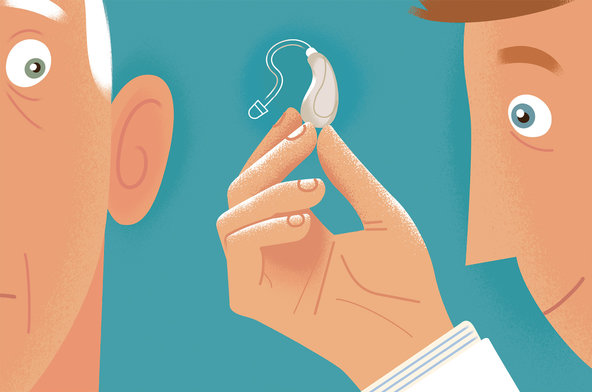 At a chamber music concert in Woodstock, N.Y., I noticed the hearing aids discreetly tucked behind the ears of the man sitting in front of me. Intrigued, I asked about them, knowing that, with tinnitus and diminished hearing in one ear, the day would come when I will need such a device.

He gently removed one to show me the tiny receiver that fits in his ear, attached by a very slender tube to the small, flesh-colored behind-the-ear case that housed a miniature microphone, amplifier and battery. Manipulating the tiny aids requires some dexterity, he said, “but they’re a lot more comfortable than the first aids I had, which felt like peanuts stuck in my ears.”

His name was Mark Hammel and, as a practicing psychologist with what he calls a “biopsychosocial approach to health,” he told me he has far too often treated people whose lives could be much improved by hearing aids but who don’t wear them. The reasons are many, including the “unfortunate fact that audiologists using hearing test cutoffs sometimes tell people they don’t need a hearing aid yet, even though functionally they do,” he said.

Hearing loss is usually gradual, and people often fail to recognize when it becomes severe enough to warrant hearing aids. Some deny that they have a problem, and instead accuse others of mumbling when they know people are talking but can’t understand what is being said. Still others regard hearing aids as unattractive devices that make them feel and look old in a society that prizes youthfulness.

However, Deborah Touchette, an audiologist and owner of the Paradise Hearing & Balance Clinics in California, said, “What many people with hearing loss don’t realize is that the signs of the untreated hearing loss are more noticeable to others than hearing aids.”

But perhaps the more important reason people fail to get hearing aids when they are needed is the cost, which is rarely covered by insurance and not at all by Medicare, unless the device is for a child. Properly fitted, up-to-date digital aids for both ears, like those Dr. Hammel wears, cost thousands of dollars. (His were $5,600, which is fairly typical.) Many people, especially older people living on fixed incomes, can’t afford them and can’t understand why such a basic health need is overlooked by private and government insurance. (The same lack of insurance coverage is often true for eyeglasses, incidentally.)

“It’s so preposterous,” Dr. Hammel said. “Knee replacements, shoulder replacements, organ transplants, which can cost tens of thousands, are covered, but not hearing aids. Are you kidding me?”

When I checked the Medicare.gov site, I found that Part B, which is intended to cover medically necessary and preventive services, “covers diagnostic hearing and balance exams if your doctor or other health care provider orders these tests to see if you need medical treatment. Medicare doesn’t cover routine exams and hearing aids or exams for fitting hearing aids. In 2015, you pay 100 percent for routine exams and hearing aids. You also pay 20 percent of the Medicare-approved amount for the doctor’s services for covered exams, and the Part B deductible applies.”

This is the financial dilemma now facing an aging population in which one adult in five – nearly 50 million Americans – has hearing loss, double the number since 2000 and likely to keep growing, according to the Hearing Health Foundation. By the foundation’s calculations, the number of people with hearing loss exceeds that of people with Parkinson’s disease, epilepsy, Alzheimer’s disease and diabetes combined.

It is also not unusual for people to purchase hearing aids that then spend all or most of their time in a drawer. Partly this results from a common misconception: Unlike eyeglasses, which can usually give the user something close to 20-20 vision, hearing aids do not restore normal hearing. They simply amplify sounds – all sounds, not just the ones the wearer wants to hear — and they become less effective the farther you are from the sound source. Still, they are far better than not being able to hear and becoming increasingly isolated as a result.

With modern digital hearing aids that are properly fitted and adjusted, the volume and the kinds of sounds the wearer hears can be modified, amplifying only the sounds needed to improve the person’s hearing. Here’s a case in which bargain shopping really doesn’t pay. As a friend told me, “The aids my grandmother could afford were so awful she didn’t use them. But my mother paid for much better ones and now she wears them all the time and is thrilled with how much better she can hear.”

Modern aids can also be synchronized wirelessly with Bluetooth to a smartphone. Some have a directional microphone, enhancing the audio signal in front of the user more than sounds coming from the sides. Some aids can also be fitted to improve hearing in the increasing number of theaters, sports arenas, and concert and lecture halls equipped with hearing loops. (A hearing loop is a thin copper wire that radiates electromagnetic signals, which can be picked up by a tiny receiver built into most hearing aids and cochlear implants.)

There are many types of devices, each with its own pros and cons. Some fit completely in the ear, others behind the ear. Some fill the ear canal, others only partly. Prices for one aid range from about $1,200 to $2,800, although people with bilateral hearing loss (usually everyone with an age-related problem) do better with aids in both ears. The cost should include the fitting and one or more adjustments. Check the Consumer Reports buying guide for detailed information at www.consumerreports.org/cro/hearing-aids/buying-guide.htm.

Critical to being properly fitted is to be examined first by a medical doctor, preferably an ear, nose and throat specialist, who can check for correctable medical conditions like impacted ear wax. Next is a thorough audiological exam, conducted in a soundproof room, that checks each ear for the ability to hear consonants and whole words.

If an aid is deemed necessary, the audiologist should discuss your various hearing needs and situations that you find most challenging, and describe the different options and costs.

Finally, after getting the selected aids, practice using them is critical, with return visits to the prescriber for needed adjustments.